The butterfly and the elephant

Yesterday, in Tsavo, a topi ran across the track in front of me. I smiled, as it suddenly felt like a day in which anything might happen.

The topi is an antelope I’d never seen before in Tsavo. I’d normally associate it with Serengeti or the coastal plains at Amu. It ran across the track at a lazy gallop that reminded me of the loping gait of a hyena. It crossed in a pleasing blur of chestnut flanks driven by characteristic ‘bruised’ hindquarters – the hue of the swollen storm clouds that, lately, have built up each evening. It wasn’t being chased, the countryside was open – it was simply running.

One of the joys of making films the way we do, is that it rewards curiosity. I like to think that curiosity is a moral virtue although I suspect that the pleasure it can bring, smacks more of vice than virtue.

I wondered briefly where the topi had come from and where it was going, but chiefly I questioned why I’d not seen topi here before. I put it down to Tsavo’s original ‘Nyika’, the dense bush that would have been unsuitable for them. It covered much of Tsavo before the pressure of building elephant numbers in the 60’s destroyed many of the trees and opened up more of a mosaic of habitats. I suspect the topi is here now because of the changes to vegetation the elephants caused then. There was so much damage to the  habitat at the time that there were calls for the elephants to be culled – to ‘manage’ their population. Thankfully the warden, David Sheldrick, resisted – sensing that it was probably part of a decades-long cycle. In that era it was a brave decision.

To me, the sighting of the topi was an example of how the presence of elephants can increase biodiversity. It was also the catalyst to look around and wonder what else elephants had enabled in the Tsavo landscape.

I didn’t have to look very far, for as I watched elephants walk through stunted Boscia bushes on the plains, clouds of white butterflies would lift briefly from their shade and then settle. They were ‘brown-veined whites’, a description I’d always thought more appropriate for weathered ‘colonials’.

Like the topi, the brown-veined white is a species that prefers grass-lands. The butterfly’s caterpillars feed on the Boscia bush, which is also eaten by elephants. I’d tried eating the leaves. They are astringent and brittle, laden with aromatic oils – well suited to retaining moisture in the dry season. I wondered if the seemingly unpalatable leaves transmitted their bitter taste to the caterpillars – maybe I should try one…

Perhaps their choice of food was less about palatability and more about building a chemical defence, as with Monarch butterfly caterpillars and milkweed. I couldn’t remember if I’d ever seen birds eating the caterpillars or butterflies – my only memory of ‘brown-veined white’ predation was limited to seeing driver ants hauling a butterfly carcass along a trail in Serengeti.

I liked the thought of the butterfly caterpillars competing with elephants for food though, and wondered if the connection led further and if it was something we might film. I find connections between species intriguing. Sometimes they are causal, sometimes more tangental –  this felt the latter. The process of making a film allows us to explore them. If they are strong enough, and fit well with the story, we can include them and share them. It is exciting.

A week before, a colleague who’d been logging the film footage had pointed out to me how so many of our shots contained the butterflies. They weren’t the subjects, or even incidental characters – but they drifted through in the background – like cherry blossom that gets carried through a park on a gust of wind.

It reminded me of a time I’d driven from Mombasa up to Tsavo at the beginning of filming, when I’d seen brown-veined whites in their millions. I’d been intrigued as there seemed to be purpose and direction to their movement. I stopped to check the wind. The butterflies flew against it – heading north east. I counted a sample and then drove through them for the next 100 miles. I estimated that almost a billion a day passed by on their move over Tsavo. It wasn’t a true migration, like wildebeest or elephant can make, as there was no round trip involved – it was the result of them having exhausted their food supply and so having to move on. I wondered what made them decide on the direction to take – were they reacting to  environmental cues? – the sight of distant storms, the infrasound of thunder… as elephants do to travel to where it’s rained to find a flush of new growth.

The butterflies’ behaviour couldn’t have be learnt; their lifespan wasn’t long enough to make the journey more than once. Perhaps it was programed deep in their genes.

I didn’t give the caterpillar-elephant idea too much thought after that. The prospect of being able to film them both at the same food source seemed remote, and hugely challenging. Something about the butterflies had seemed familiar though – but the more I tried to pin it down, the further it slipped away.  Perhaps it wasn’t surprising. They are probably the commonest butterfly in Africa and I’d seen them everywhere, even at sea, out of sight of land.

Elephants passed by camp that night and the next morning the piles of dung they left became a banquet for the butterflies. Each would hover briefly, then land and uncoil its proboscis to suck moisture and salts. Brilliant ‘grass yellows’ and ‘brown-veined whites’ jockeyed for position – it was just what we needed to film. It showed how important elephants are to the ecosystem in a much more visual and elegant way. 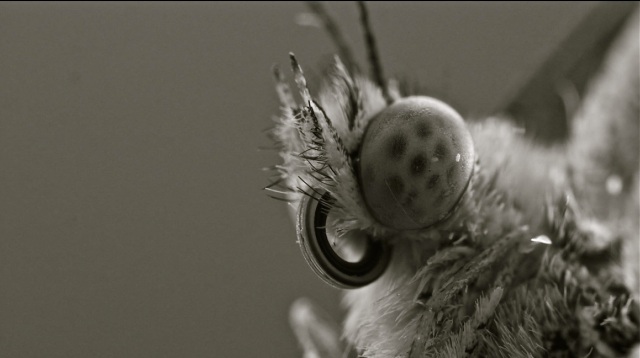 The more I thought about the butterflies, the more I noticed them. I started seeing them everywhere. At night I noticed them roosting just off the ground outside our tent, always returning to the same clump of grass. When I looked closely I thought there were two different species, but when I tried to identify them I found that I was seeing two different morphs of the same species – one a dry season form, the other the wet season form. As the days past and the wet season progressed, so one gradually replaced the other.

I’d forgotten all about the niggling familiarity until I chanced on the brown veined white’s latin name in a book – Belenois aurota.

Seeing it written, triggered a cascade of memories.

It took me back to my childhood bedroom in Cornwall, decades ago. To encourage my fascination with wildlife, my parents had given me a glass display case of butterflies and moths. It hung on the wall next to my bed. It was my pride and joy. In the centre of the case was a giant Atlas moth, and scattered around it, like planets circling the sun, were swallowtails, ‘birdwings’ and charaxes. In the lower right-hand corner was a group of three small butterflies – mounted vertically on a strip of polystyrene, glued onto blue baize. Consigned to the margin, they were the least glamorous specimens.

The pins that secured the bodies also held their name tags and I’d make a point of reading the latin names before going to sleep each night. The lowest of them all was a small white butterfly with dark veined wings, pinned through the underside. The typed card alongside it read: ‘Belenois aurota – wet season form’.

Over forty years later, we’d finally met again. It made me smile.

A wildlife filmmaker in Kenya. My home is in Cornwall. My heart is in Africa. I have a tent in Tsavo. I share it all with Vicky. We are working with an amazing team, making a wildlife feature film - www.facebook.com/theelephantmovie
View all posts by Mark Deeble →
This entry was posted in Tsavo and tagged African wildlife, biodiversity, butterfly, David Sheldrick Wildlife Trust, ecology, elephant, Kenya, migration, naturalist, Tsavo, wet season, wildlife filmmaking. Bookmark the permalink.

11 Responses to The butterfly and the elephant