Ndume : the story of an elephant 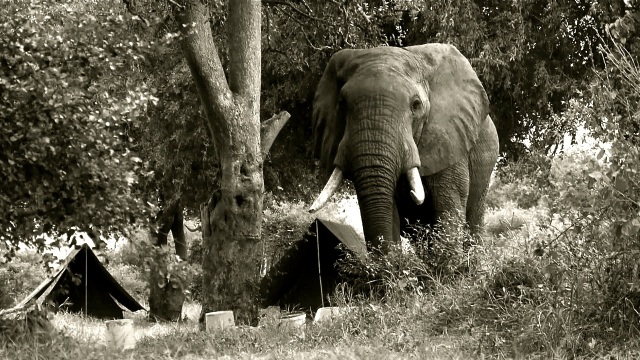 A tribal family’s ancestral forest home is surrounded and cutoff from the main forest by illegal loggers and slash-and-burn farmers. When they eventually break out to try to rejoin the main tribe, they are discovered at dawn and set upon by a violent mob – the family is split, some run for the safety of the trees, others are hacked to death with machetes. In the fighting, one infant receives such a blow to the head that he’s knocked unconscious. On the verge of being killed, he is rescued from the mob by forest guards, and flown to a distant city. He wakes up in an orphanage, and screams for his mother. Ripped from his friends, his family, his mother, he has nightmares for months.

As the years pass, he slowly makes new friends, and with them he is moved to a ‘halfway’ house, hundreds of miles away from his forest home. Like many youngsters, he gets into trouble. He becomes a ringleader, others follow – they raid farms to steal food, damage planes at a local airfield, and are finally set upon and wounded by vigilantes. Fearing that he’ll be killed, his foster parents arrange for him and two friends to move a hundred miles away, to start a new life far from civilisation, where nobody knows them. The foster parents hear nothing, but a month later, he appears alone –  he is only 11 years old, but he’s walked 100 miles undetected, crossed roads, railway lines, rivers… He’s welcomed home, of course, but the experience has changed him – he wanders off more, returns less frequently.  Sometimes he brings friends, sometimes he’s alone. Then at the age of sixteen he vanishes into the wilderness …and isn’t seen again.

That’s the story of Ndume – Ndume is an elephant.

That was as far as it went, until last year, when a mature bull elephant wandered into our filming camp and made himself at home. (https://markdeeble.wordpress.com/2014/06/01/adopted-by-an-elephant )

At the time I wrote, we wondered where he’d come from – was he a wild bull? Was he an ex-orphan?

We contacted the Sheldrick Trust (www.sheldrickwildlifetrust.org)  and arranged that the next time we saw the bull, we’d call their head keeper, Joseph, and that he’d come out to check.

In the meantime, we’d named our guest ‘Chota’ (lit. ‘sucking-one’) for his predilection for emptying our water tank. Weeks past, but we could never get the two together. Chota would come, we’d call Joseph and when he arrived, Chota would be gone. Then the rains came, the river rose, and camp was cut off for days at a time. Chota disappeared, and with him went the possibility of discovering his identity.

When the dry season returned, Chota reappeared – but only at night. By dawn, he was nowhere to be seen. We were running out of hope. Our description of meeting Chota had resulted in emails from around the world – the correspondents all hopeful that he was an ex-orphan. We’d promised to follow up, but it now looked like his identity was mired in ambiguity. We’d taken photographs and video to Joseph and Mishak, a keeper who’s been with the orphans since the 80’s, but they couldn’t identify him. They wondered if he might be one of Daphne Sheldrick’s original bull orphans that were trucked down from Nairobi more than twenty years ago – perhaps he was Dika from Amboseli, or Ndume – a victim of human-wildlife conflict from Imenti.

They needed to see Chota, to talk to him, and that was the problem.

Last week, that changed. Chota re-emerged and strode straight into camp – in daylight. He presented his profile, and confidently walked from one end of camp to the other – then he stood looking straight at us. It felt like he was auditioning for a part in the elephant movie we are making  www.facebook.com/theelephantmovie . His first visit was brief, but as days passed, he hung around for longer and made himself at home. Drinking from the shower buckets had always been more preferable to ambling 200m to dig in the dry river bed. Once we saw his behaviour start to develop a similar pattern as before, we called Joseph.

When the DSWT pick-up arrived with Joseph and Mishak, Chota was nowhere to be seen – but we’d predicted that.  This time, one of our team had followed with a radio. We finally caught up with him a mile away in thick bush. He’d joined a family and was checking out the females. Even then, neither Joseph or Mishak could be sure he was an ex-orphan. Nine years is a long time in the development of a young bull – physically they change – tusks grow, sometimes they get broken, ears get ripped – they ‘grow into their genes’. What doesn’t change is their memory.

When Chota heard Joseph and Mishak’s voices, he stilled. Then, he lifted his head and wandered slowly over.

If he was surprised to see them, he didn’t show it – he gave a gentle contact rumble and then stood, quietly – just looking.

Who knows what was going through his head. Did he remember the years of walking out with them, as surrogate parents, around Masinga Hill?

Did he remember the cold nights in Nairobi when, at 3 months old, he’d woken terrified and screaming – when Mishak had rearranged his blankets, curled up beside him, given him a bottle, and his calm voice had lulled him to sleep again. I like to think that he did.

Ndume’s ( pronounced: n’doo-may) early years are well documented. Even before his reappearance, the Sheldrick Trust considered his reintroduction a success. That he is here today, a mature bull, is testament to the trust’s methods. It is far easier for them to monitor female ex-orphans – they form herds, they visit. Bulls are much more difficult – they disappear. Their natural behaviour is to leave their natal herd and spend years in the wilderness. They join all-bull groups and wander huge distances.

Ndume’s reappearance is extraordinary. That he is fully-integrated is unquestionable – occasionally he turns up with two other bulls, older and more battle worn – but it is clear that he leads them. We’ve seen him mating. He is in great physical condition. His tusks are wide-set and sweeping. He carries no scars from poachers’ arrows. He is unmarked.

Mishak and Joseph told us of his early days, and of his translocation – how he’d been sedated and enclosed, and driven a hundred miles to Ngulia Valley – only to remarkably find his way home to his keeper’s door a month later. I went back to DSWT’s online archives to read Ndume’s story. It was all there – the attack on his family, his rescue, the nightmares. https://www.sheldrickwildlifetrust.org/asp/orphan_profile.asp?N=28

Then I thought of the glorious bull that wouldn’t be alive today if it wasn’t for the Sheldrick Trust, and its supporters. Ndume might have lost his family, but around the world, he has gained a large number of friends.

I think of children saving their pocket money, as I did, to donate it to a good cause. I think of people going without, and putting a little money aside each week – until they have raised enough to ‘adopt’ an orphan. Many of them will never have the opportunity to travel to Kenya to see the results of their kindness – yet they continue to help.

Last week, as we flew north to the Milgis, we passed over the Imenti forest where Ndume had been born. It’s a relict of the massive forest that once covered the eastern slopes of Mt Kenya. Its stands of cedars, clear streams and grassy glades, are far from Tsavo’s arid ochre. As we looked down, I imagined the scene that had played out 25 years ago – the excited shouts, the terrified bellows – the babies’ screams.

As we continued north, I reflected on how a story that started with human violence, had been turned around by human kindness and generosity.

The image that stays with me though, is that of Mishak and Joseph when Ndume raised his head and walked slowly towards them – of the tears that welled up, and the smiles that just grew and grew.

A wildlife filmmaker in Kenya. My home is in Cornwall. My heart is in Africa. I have a tent in Tsavo. I share it all with Vicky. We are working with an amazing team, making a wildlife feature film - www.facebook.com/theelephantmovie
View all posts by Mark Deeble →
This entry was posted in Tsavo and tagged bull, Chota, David Sheldrick Wildlife Trust, Deeble and Stone, elephants, Kenya, Ndume, Sheldrick Trust, The Elephant Movie, Tsavo. Bookmark the permalink.

79 Responses to Ndume : the story of an elephant